Fingers and Steel, Baby! Our Picks for the Top 10 Ross the Boss Solos 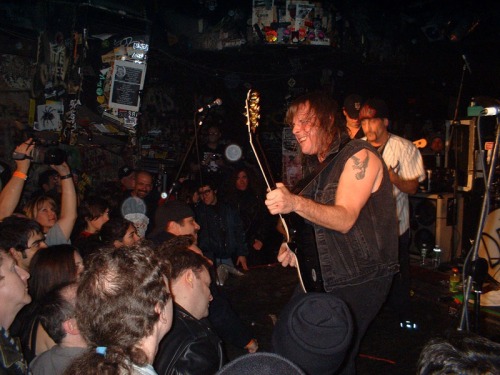 We here at DFFD are used to doing impossible things every day. Yesterday, we made a dodo egg omelet for breakfast. Today, we attempt something even more ridiculous: We’re rating the top 10 Ross the Boss solos. What’s that you say? “Outrageous!! It can’t be done!! It’s like going to the Louvre, and declaring this Da Vinci is way better than that Da Vinci over there!’” Well, pooh-pooh and hubba hubba, we laugh at your concerns, bwahaha. We’re doing it anyway.

1. Dictators + MWK material only. The “best solos in Manowar” post will have to wait for another writer on another day. Fans of Shakin’ Street, Heyday or the Spinatras will also have to wait for their time to shine.

2. Since no 2 RTB solos are ever the same, we’re restricting things to studio or live albums, otherwise we’ll be here all week. Maybe you have time to go through 100 bootleg versions of “Two Tub Man” to find the best one, but I sure don’t.

3. No technical jibber-jabber is allowed. It either rocks or it doesn’t rock.

Without any further ado, show us where you live, Ross:

#9. “New York New York”: This the logical starting place, as it usually serves as both the intro to the live set, and as their mission statement. “Hey, this is who we are and what we do. We have this guy over here with the guitar to make with the loud and the proud. If you don’t like it, then go back to Russia.”

#8. “Back to Africa”: One of the few times the Dictators completely indulged their tendency towards humor. I’ve never heard this live, but I can’t imagine them doing it with straight faces. The song may be a hoot, but there is nothing funny about either of the short rippers Ross tosses out. Quick and fun.

#7. “Master Race Rock”: The second half, with “NYNY,” of most shows’ left hook-right jab opening combo, “MRR”’s solo, is dominated, defined, by those first three sustained notes. If you’ve been to a show, then you KNOW what I’m talking about – Scott’s riffing away, Andy’s wrapping up his bass solo, RTB is hiding by his amp, about to rush the front of the stage, and here come those three notes. Before you know what happened you’re hooked, cleaned and in the boat.

“Here come those three notes. Before you know what happened you’re hooked, cleaned and in the boat.”

#6. “Disease”: If Procol Harum and Deep Purple had a love child, its name would be “Disease.” It’s approximately three hours long, has a plot line only slightly less ridiculous than an evil twin episode of your favorite soap opera, and lumbers along like a brontosaurus with a hernia. Ross sets the tone with his “Doomsday’s a-comin’“ riff, and then he delivers Armageddon to your doorstep with the bombastic solo.

#5. “What It Is”: RTB gets soulful by the bowl full as the Dictators go Motown. The first solo is uptight, its reprise during the fade is outta sight.

#4. “Channel Surfing”: A kissing cousin to the Chantays’ “Pipeline,” this is the only instrumental in the Dictators’ catalog. Scott plays lead during the verses, RTB plays the bridge and solo. Nice and melodic, a good place to catch our breath before the home stretch.

#3. Young, Fast, Scientific”: You have to strain to hear it under the muddy production, but this may be Ross’s flashiest solo. Lots of fiddly bits and cluster bombs of notes, it’s the solos that would wow the Berklee kids the most.

#2. “Who Will Save Rock & Roll?”: I place this tune at the apex of the Dictators’ career. I bet I played the 45 a dozen times a day when I first got it. It may be the Dics’ best song, performance and recording ever, and is home to one of RTB’s most passionate and energetic solos. Take another look at YouTube for the fantastic version of this from the Magic Stick in Detroit from 11/13/99 [Editor’s Note: Embedded below for your convenience]. If you haven’t seen this 20 times already, if you don’t use this clip to show your skeptic buddies and yawning girlfriend when they ask, “Geez, what’s so great about this band anyway?” then I gotta ask — why the hell are you reading this?

#1. “Stay With Me”: The most popular tune the band ever had, and their most-covered song. It’s a joyful noise. RTB’s first solo is perfect, the second, longer solo at the coda even more perfect. Its only problem is that it isn’t long enough!

I’m sure you math majors have noticed that this only comes to 9 tunes, while you were promised 10. The #10 spot is a 53-way tie between all the rest of RTB’s solos.

Filed under Lists, Ross the Boss

3 responses to “Fingers and Steel, Baby! Our Picks for the Top 10 Ross the Boss Solos”