Mid-February marks the anniversary of a triumphant week the Dictators spent in 1981. This was the apex of their “reunion” era, and it was celebrated with 4 gigs in an 8-day span.

The run of shows kicked off at My Father’s Place on Lung Island on Feb. 3rd. It was a relaxed, loose gig. Mark the Animal was in the house, and much of HDM’s banter

for the night centered on the entourage of beautiful women Mark brought with him. He of course joined the band for the encores of “Two Tub Man” and “Search and Destroy.” The public debut of “Loyola” also took place this night.

The week continued with a high-profile gig at Club 57 on St. Mark’s Place on Saturday, Feb. 7th. Huge crowd, total mayhem, a great night. A large chunk of this show made its way to a Manhattan cable TV show called Paul Tschinkel’s Inner Tube. Here’s a link to the first couple of tunes from the show:  http://www.youtube.com/watch?v=D-3yTsF1KeQ.

Gig #3 was on the following night at the Fast Lane in Asbury Park. These pics from that gig are courtesy of our good pal Mike Frigerio. Check out the rest of his great photos and toys at www.nuclearjackalope.com.

The barrage of gigs wrapped up with the biggest night of all, at the Left Bank in Mt. Vernon on Wednesday, Feb 11th. The first live album was taken entirely from this gig. The Dics were smokin’ this night. There is 40+ minutes of material from this show that didn’t make it to the live LP that’s just as “on” as the stuff that did make the cut.

According to the flier, this show was also broadcast on NYC cable. Although no vids from this show have ever reappeared in collector’s circles or made it to YouTube, we will always have F*ck ‘Em to serve as documentation of the raw power that was on display. 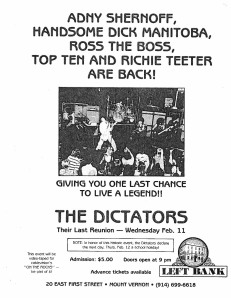