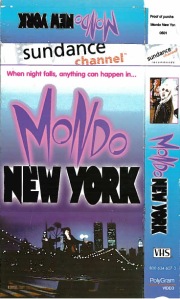 The summer of 1989 found a commercial in heavy rotation on the local “alternative” radio station. WFNX was playing the bejeezus out of a spot for a movie called “Mondo New York.” It started out as a backbeat-heavy thing, interspersed with quotes from the film, but then a very familiar riff came roaring out. “Holy Cow – is that the DICTATORS??” was my reaction the first time I heard it. Close enough, it was actually the debut recording on Manitoba’s Wild Kingdom, with an un-credited RTB on lead, blasting their way through “New York, New York.”

The very cool radio spot played incessantly for 2 weeks, leading up to the movie’s debut weekend. Which, by the way, was also its closing weekend. The reviews for the film were uniformly savage, with “pointless, pretentious, and puerile” being my favorite, and pretty much chased the flick out of town and into oblivion, where it’s remained for the last 20 or so years. Rumors of the film containing some footage of our boys went unconfirmed.

I recently saw a VHS copy on Amazon, and thought to myself, “Well, the reviews were terrible, and the soundtrack LP was worthless.  But the commercial was great, so surely the film it came from has to have some small degree of merit, right? Right?” Well, $20 later, I’m here to tell you that MNY is every bit as putrid as the critics said it was.

MNY is a kissing cousin to “Jabberwalk,” in the respect that it presents a series of vignettes that purport to represent the cool and the crazy from the NYC of its era. Judging from the contents of the film, 1989’s NYC was 99% populated by performance artists.

There is nothing lower on the artistic food chain than performance artists. OK, an argument could be made for mimes, or maybe Celine Dion. Performance art is like broccoli, in that it gets served up frequently under the guise of being good for you. If not done exactly right, then it’s either horrible, or horribly bland. MNY has an overabundance of both types. Yams, headless mice, and unwanted nudity for as far as the eye can see. Put it back on, baby.

MNY has exactly 2 redeeming features going for it. The first is the extremely cute actress Shannah Laumeister, whose wandering from place to place serves as the narrative thread for the film. The other is at the 80 min mark, where we’re treated to a truncated live version of MWK’s “New York, New York,” which provides the soundtrack for a minute or so of pointless footage of the kids in the pit slam-dancing. Memo to the director: Gee, did it ever cross your mind to point the camera AT THE BAND???

“Mondo New York” is 83 minutes of my life that I’ll never have back. Make sure you have plenty of hot water before watching this, because once you’re done you will need a bath, and your VCR will need a douche.

And don’t call me Shirley.

Dictators rating: 2 RTBs out of a possible 5.

Filed under Movies, The Cincotta Archives