It’s Shatner’s World. We All Just Live in It.

Dr. Demento has always been way up there on the list of people I wanted to punch. I love the silly as much as the next guy (and there’s 8 years of that in this blog’s archives), but there’s a proverbial fine line between clever and stupid, and he never seemed to know where that line was.

In the classic sense of the blind dog finding a bone, Dr. D’s latest CD of reinterpretations of punk classics is ridiculous fun, and in one fell swoop almost absolves the good doctor for inflicting Weird Al on the world.

The highlight of the CD is the tease track of William Shatner’s version of the Cramps’ “Garbageman,” and it features Dictators NYC alumnus Dean Rispler (AKA the only man in NYC rock history with hair as epic as original Cramps guitarist Bryan Gregory) on guitar.

END_OF_DOCUMENT_TOKEN_TO_BE_REPLACED

Bubble gum cards have a long and rich history of being a fun way to waste spare change while indulging our inner desire to collect useless junk for dubious purposes. Who amongst us didn’t spend way too much of their allowances trying to complete that jumbo picture of Curley-Joe (as if there could have been any other kind) on the back of the 3 Stooges cards?

Punk rock’s mainstream exposure was at its apex in 1977, leading to a set of punk rock bubble gum cards foisted on the impressionable youth of the Netherlands. Neder punk seemed to be loosely defined to include no actual Neder bands, but did include Dwight Twilley, Split Enz, and these 2 shots of our boys. Go figure.

It’s obvious to me that whoever made these was not a baseball card guy. They left the backs of these things blank, and missed the priceless opportunity to post useless filler on the back of these as my old baseball cards used to have, such as “Eddie was voted Most Likely to Die a Fiery Death in high school,” or “Young Johnny Rotten was voted Most Vile by his peers in 1st tier.”

The problem with buying bubble gum cards is that the companies always salted the packs with a zillion copies of nobodies, the Joe Schlobotniks of the world, thereby forcing you to buy a lot of packs to find the stars. Judging from my stack of approximately 75 1968 John Bocabellas that were accumulated while searching for that Nolan Ryan rookie card, if my luck with punk rock cards held true to form, I would have wound up with 65 Babys and zero Sex Pistols.

Please tell me that these came with beer-flavored gum!

Filed under The Cincotta Archives, Tomfoolery

It’s always great to see Ex-Dictators mentioned in the news, or at least in the pseudo-news. But what’s next — are you gonna tell me they DON’T wanna rock??

Members Of Twisted Sister Now Willing To Take It
(THE ONION)

Filed under Mark the Animal, Tomfoolery

On With the Show, This Is It!!

Note: Last month’s lively discussion about the merits of ‘Manifest Destiny’ led to a comment of “it would make for a great musical on Broadway!” This, to me, was sheer genius, so with no further ado, we present…

A study of Ambition, Control and Ego

We open with the TA huddled over his keyboard, arguing with the Producer over his role in the band, and his desire to be a studio-only musician.

Producer explains his position, and basically forces TA into being an on-stage performer in the band.

TA wanders the stage, struggling to reconcile his ambition with his lack of desire to perform. Heartbroken, he falls into fitful sleep.

3rd song: Sleepin’ With the TV On, sung by TA with the choir

Dream ends with the Creation rising from the mist, immediately going into…

4th song: Science Gone Too Far, sung by TA and the Producer

Opens with the Creation sitting at a lunch counter, being serenaded by Mary-Anne.

Scene change — we cut to TA, alone in his bedroom, looking out into the night, lamenting Mary-Anne’s sudden shift in amour.

TA argues, again, with the Producer, over his role in the band, while the Creation wanders through with the band hovering around him.

9th song: NEXT BIG THING, sung by the Creation

The Creation and the TA duet on 10th song: YOUNG, FAST + SCIENTIFIC

We once again see the TA, now exclusively a songwriter, only now on the West Coast, happily married to Mary-Anne. In a beach scene, he sings…

You celebrate Throwback Thursday your way. We’re celebrating it with animated gifs we made from the glorious Manitoba’s Wild Kingdom video for “The Party Starts Now!!” MWK + gifs = a party that never stops!

“It doesn’t exist,” they said. “It’s a thing of legend, like trolls, leprechauns, and eskimos.” Well bunkies, today’s episode of “Mythbusters” is dedicated to you.
I found this under a pile of off-brand clown wigs, in a thrift store in Mooselip, NH. Our next quest will be to locate a functioning eight-track player, to see if “Two Tub Man” has that familiar  8T “Ka-CHUNK” in the middle of it. 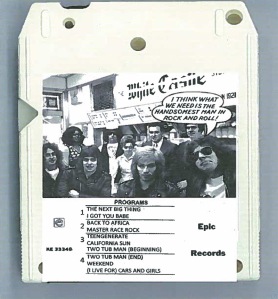 Cue the theme from “Deliverance:” It seems that another band has foolishly adopted the name “Manitoba.” I caught this listing from last Friday’s lineup for Ralph’s Diner in Worcester, Mass. Ralph’s is one of the last remaining rock dives in the US of A, and we hope to one day catch the real Manitoba there.

Accept no substitutes, my brethren and sistren — while there may currently be dueling Manitobas, there is only one MANITOBA. Expect Manitoba (formerly The Silence) to soon be Manitoba (currently the Silenced).

They Went to the Land of the Ice and Snow 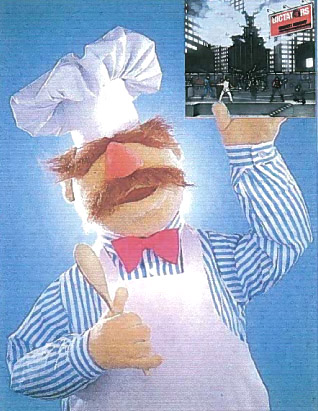 October of 1996 found the Dictators on their first and only tour of Sweden. With the possible exception of Spain, there is no other European country that has a greater appreciation for rock and roll than Sweden, and our boys spent a whirlwind 10 days supplying both in the land of the lutefisk.

In between practical jokes pulled by their tour mates, the Hellacopters (“No kidding Manitoba, whale blubber behind your ears is a real-turn on to Oslo women!”) and participating in the Swedish National Pastime, which is making fun of the Finnish***, the band somehow found time to play 9 dates with the Northern Lights as a backdrop.

October 2, 1996, was the first date, at Geno’s in Stockholm. There’s an excellent video of this show that hasn’t shown up on YouTube yet, so you’ll have to take my word for it that our guys were firing on all cylinders.

*** Q: Why do Finnish people never play hide and seek?
A: Because nobody wants to look for them.

Q: How many Finns does it take to change a light bulb?
A: Five. One to hold the bulb, and four to drink enough vodka until the room starts spinning.