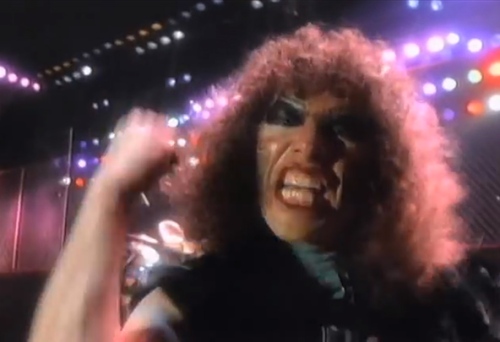 It’s always great to see Ex-Dictators mentioned in the news, or at least in the pseudo-news. But what’s next — are you gonna tell me they DON’T wanna rock??

Members Of Twisted Sister Now Willing To Take It
(THE ONION)

Filed under Mark the Animal, Tomfoolery

Happy Birthday to Mark the Animal!!

As if he wasn’t scary enough without the make-up!! This is overkill on his part — he could scare people in a Santa suit.

Filed under Mark the Animal, PSA

Happy Birthday to Mark the Animal!!

END_OF_DOCUMENT_TOKEN_TO_BE_REPLACED

Filed under Mark the Animal, PSA

THE DICTATORS RE-FORM TO HEADLINE
“THE TENTH ANNIVERSARY OF PUNK”

Ross and Scott with the Dics at the Ritz in '86. Photo courtesy of CJ Scioscia

NYC? The Big Apple? Me? It was January, 1986. I was 32, and had never been east of Dayton. But when the call came from Salvi, telling me about the Dictators reforming to headline the “10th Anniversary of Punk” at the Ritz, I did what any red-blooded Dictators fan would do … I borrowed $250 from my then-girlfriend and headed to Midway Airport! I hopped a Thursday night flight to Newark via People’s Express, a budget airline that required passengers to pay in cash once the plane was in the air! People’s Express made traveling by Greyhound seem like a first-class trip in comparison. But I got there in one piece. Who knows what fell off that plane en route?

I landed at Newark, no plans, no room, ending up crashing at the Ben Franklin Inn (“Where a Penny Saved…”). Friday dawned bright and crisp, I grabbed an eventual bus to downtown Newark. A nice gentleman sat next to me immediately, asking me lots of questions, several times inviting me to hop off the bus for “a drink or two.” People sure were friendly in Newark! And I’d heard such bad things.

END_OF_DOCUMENT_TOKEN_TO_BE_REPLACED

What an enchanting way to kick off a new year and new decade: Sit back, crank up the speakers and behold the Dics and their afros performing “Search and Destroy” in a clip that hasn’t lost a lick of its kinetic charm in the nearly 33 years since it was filmed. Manitoba takes the mic like he was fired from a rocket, Ross stares his singer down for an unsettlingly long time, Mark the Animal rocks ferociously, Ritchie Teeter punishes his drum kit, Andy hides in the background like a hired hand, and the otherwise cool-looking Top Ten, he wears short shorts.

This video of the performance is a bit better synced than most we’ve found, which ups the enjoyment factor considerably. Also adding to the fun: the 250 comments on this poorly synced version of the video. Look out, honey, they’re using technology! I’ll save you some serious scrolling by reproducing my faves — complete with original spelling and punctuation, for the authentic experience — starting with the uploader’s intro:

END_OF_DOCUMENT_TOKEN_TO_BE_REPLACED

Talking to the Animal

My esteemed colleague Salvi C. brought this illuminating interview with former Dictators bassist, and current Twisted Sister, Mark “the Animal” Mendoza to my attention. From the Twisted Sister website, the article — of indeterminate age — features a wealth of nuggets from possibly the only person on the planet who refers to Andy Shernoff as “the keyboard player.”

On hearing The Dictators Go Girl Crazy! for the first time:

“I listened to it and thought it was the worst crap I ever heard! And I said that there’s no way I’m playing in this band. I’m sorry. I’m just not playing this crap.”

On how he impacted the band:

“When I joined the Dictators I kind of changed their style of music. All of a sudden these guys had to play pretty hard to keep up with me. It was like all of a sudden ‘super charging’ the band.”

END_OF_DOCUMENT_TOKEN_TO_BE_REPLACED

Filed under Interview, Mark the Animal