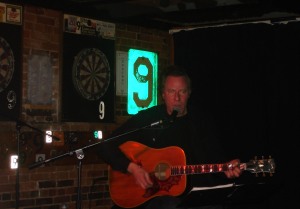 The Andy Shernoff road revue made a second visit to Café Nine in New Haven last night. The wet and foggy conditions made for a little smaller crowd, but what was lacking in numbers was more than made up for by the enthusiasm of the lucky few.

Andy was in fine form. Very relaxed and cracking jokes all night, we got to see a goofy side that’s usually hidden. “Haircut and Attitude” got new lyrics of both “hairstyle” and then “mullet and attitude!” “Weekend” made its acoustic debut, as did a previously unheard collaboration between Joey Ramone and Andy, called either “The Island Song” or “You Make Me Tremble.”

The next gig on the dance card will be Friday, March 12, at The Record Collector in Bordentown, N.J.

New York, New York
Weekend
Master Race Rock
Find Something Beautiful
Baby Let’s Twist
Stay With Me
Haircut and Attitude
Chinese B***h
Stop Thinking About It
Who Will Save Rock and Roll

THE DICTATORS RE-FORM TO HEADLINE
“THE TENTH ANNIVERSARY OF PUNK”

Ross and Scott with the Dics at the Ritz in '86. Photo courtesy of CJ Scioscia

NYC? The Big Apple? Me? It was January, 1986. I was 32, and had never been east of Dayton. But when the call came from Salvi, telling me about the Dictators reforming to headline the “10th Anniversary of Punk” at the Ritz, I did what any red-blooded Dictators fan would do … I borrowed $250 from my then-girlfriend and headed to Midway Airport! I hopped a Thursday night flight to Newark via People’s Express, a budget airline that required passengers to pay in cash once the plane was in the air! People’s Express made traveling by Greyhound seem like a first-class trip in comparison. But I got there in one piece. Who knows what fell off that plane en route?

I landed at Newark, no plans, no room, ending up crashing at the Ben Franklin Inn (“Where a Penny Saved…”). Friday dawned bright and crisp, I grabbed an eventual bus to downtown Newark. A nice gentleman sat next to me immediately, asking me lots of questions, several times inviting me to hop off the bus for “a drink or two.” People sure were friendly in Newark! And I’d heard such bad things.

END_OF_DOCUMENT_TOKEN_TO_BE_REPLACED 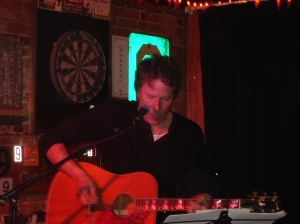 It can sometimes take digging to find silver linings in the cloud that is the Dictators’ current break from playing together. One positive by-product is the recent blitz of solo product and live appearances by band members. Most recently, we’ve been gifted by the rarest of the rare — solo acoustic gigs by Andy Shernoff. There were four hush-hush affairs at the Lakeside in November and December, one snow-delayed show at the Brighton Bar on New Year’s Day, and then last night’s show at Café Nine in New Haven, the first “official” road test. The DFFD brain trust have been lucky enough to catch three of these gigs, his first solo shows ever.

If you have ever been to the Lakeside — or to Café Nine — you know that it’s in your best interests to arrive early for two reasons: 1, there are maybe three good places to sit in front of the bandstand before you end up standing in the obstructed views, and B, to take maximum advantage of the 2-for-1 drink specials.