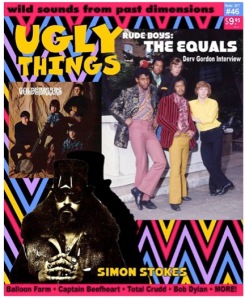 I know what you’ve been thinking. “Hey, those knuckleheads over at the DFFD Blog haven’t had much to say lately. Where they been at?” Well, here’s the reason for the long gap between posts. I spent almost a year tracking down the remaining members of Total Crudd, which was RTB’s band prior to joining the Dictators. A dozen interviews with seven members took a while to assemble, but the end result was worth the effort. The story will appear in Ugly Things #46, which will be available later this month. Expect lots of nonsense about epic parties, illegal substances, and a monkey.

If that isn’t enough to entice you, here’s Ross with fellow TC alumnus (and first Dictators drummer) Jim Sugarman from their fourth-grade class picture. (That’s Ross in the glasses.) This kinda stuff is website GOLD. Here also is a story from Jim that didn’t make the cut for the final article:

Here’s the story about Ross’s white guitar. My brother (6 years older than us) bought himself a white Gibson SG and a Fender Vibrolux amp. After a while he decided to go to college overseas, needed money, and sold both to Ross for around $300. You can imagine how he’s kicking himself today.

One of the first times Ross used the guitar, maybe 7th grade, was when we were rehearsing in the neighborhood youth center. We did a blistering version of “Spoonful,” improvising our own solos and generally going nuts. At the end of the song, in marched in the local band that consisted of the neighborhood thugs. Their guitarist went up to Ross and says, “I bet you think you’re hot sh*t!” and started pushing and punching him. Ross calmly put his guitar down someplace safe and proceeded to kick his a**.”

Filed under Interview, Ross the Boss