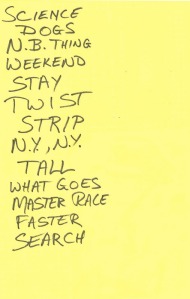 The Channel was a low-ceilinged warehouse near the South Station Postal Annex, accessible only by several pitch-dark alleys. I feared for my life every time I went there. This show was in a huge snowstorm, which closed many roads, and left me doubting whether or not the band would make it, or if any other fans would brave the trip. No problems on either front — the place was banged out, 800 strong in attendance!

The Dics were obviously psyched to be making an extremely rare road trip, their first Boston show in almost nine years. The show had an unusual intro: They opened with “Science Gone Too Far,” and each band member took the stage individually as his part was called for. Rich Teeter began alone with the thunderous drum roll, then Andy came out and rumbled the bass line, then Scott threw the rhythm guitar on top, then RTB, and finally Manitoba brought the energy level off the charts with his entrance.  t was a very exciting beginning, and it never let up. Band members were hopping around like jumping beans, and Manitoba gave unprecedented love to Boston for being so loyal. I almost fainted when he yelled out, “Boston is effing GREAT, and I MEAN IT!”