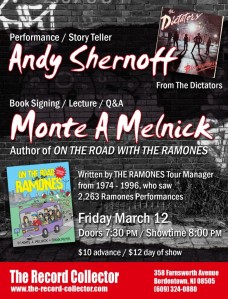 Handsome Dick Manitoba is rebroadcasting his radio interview with Iggy Pop this Friday (March 12) in honor of the Stooges’ induction into the Rock & Roll Hall of Fame next Monday. Catch the interview, recorded last October, at 11 p.m. ET on the “Handsome Dick Manitoba Radio Program” in Little Steven’s Underground Garage, Sirius 25, XM 59.

Thunderbolt Patterson will be performing songs from The LP Is Dead at Austin’s SXSW, backed by Dave Bone and the Troublemakers. He’ll be singing lead and playing drums. Shows already announced are being held Friday, March 19: 2:15 p.m. at Sonny’s Vintage, 7:15 p.m. at Spiderhouse Cafe.

Scott Kempner just wrapped up a tour of Spain with the Del-Lords. He currently is continuing work on the band’s new album. More info here.

Ross the Boss, who just played some dates in Germany with the Ross the Boss Band, is now in the studio working on the band’s second album. Check out a recent video interview with Ross at venue music.