Still Goin’ Girl Crazy After All These Years

Note: This is one of a series of posts in The DFFD Blog Goes Girl Crazy! special — a monthlong commemoration of the 35th anniversary of the release of ‘The Dictators Go Girl Crazy!’

The thrill was gone. The fun was dwindling. Awful, boring music by Pink Floyd, The Dead & The Eagles was oozing out of every radio. Led Zep was the biggest band in the world, inexplicably more popular than The Who. The Stones were still up there, too. Most of my favorite bands were either on the way to oblivion, or were already there. The Coop had just replaced his band with dancing toothbrushes. The mighty Sabbath was sputtering. Blackmore had ditched The Purps. Jimi was still dead.

Acts like Blue Oyster Cult, Aerosmith, Queen, Thin Lizzy, The Nuge & Kiss had steadily built large followings, all would break into the rock & roll stratosphere in the next couple of years. AC/DC was unknown. We upper midwest record store geeks had just found our great white hope, a band from up Rockford called Cheap Trick, who were blowing our earflaps off in the bars and clubs around Chicago. Man, they were the most exciting live band this side of J. Geils! The Trick brought back some of the thrills, fun, and power we’d been pining for, but it’d be almost two years before they got an album out.

It would be another year before the two headed dog of punk and disco would begin to howl at each other. 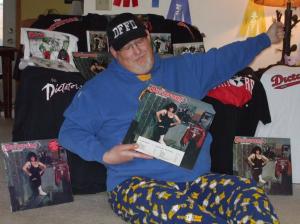 Working/hanging out in a small record store on 63rd Street, Yardbird Records, we had access to lots of promo albums. Most got a cursory glance, possibly a single spin, then were sentenced to life in the bargain bin. When a white label, time stickered copy of THE DICTATORS GO GIRL CRAZY arrived, despite the B.O.C./Krugman/Pearlman connections, I slapped a price across the cover in grease pencil, and it joined, unplayed, the other promo vinyl flotsam. What the hell was this? Was it like Doctor Hook or something? Was $1.69 too much for this thing? Who’d possibly buy it? It was quickly filed and forgotten.

While thumbing through an in-store issue of the already stuffy and snobby Rolling Stone, I got a laugh out of Dave Marsh’s vitriolic attack review of GGC. Not long after, a new issue of Creem arrived. Their review was 180 degrees removed from Marsh’s, saying something like “if you see this album, don’t ask questions, just buy it!” Hell, if Creem loved it that much, and even more importantly, if the album pissed off Rolling Stone that badly, maybe it actually was worth a listen after all. But when I went to pull the LP out of the bargain rack…gone! But now I HAD to hear this album.

So I entered a special order for my own copy of GGC…on 8-Track Tape. And I waited. And waited. And eventually forgot all about it. (It turns out the album never was released on any format but vinyl until the CD appeared in the early 90’s). Later that summer I sauntered into a new competing store to check out their cheapo bin, and came face to face with a promo copy of THE DICTATORS GO GIRL CRAZY…with “$1.69” written across the front in grease pencil, in my handwriting! It was a sign! There was an instant connection. I knew then and there I had a new favorite album.

Sure, the band was a bunch of snotty, silly NYC guys, I was a cornpone from the midwest. But they loved White Castle, wrasslin’, cars, girls & beer, too (no surfin’ for me, thanks). They were in my age bracket. Musically, they were a perfect combo, The Stooges meet Blue Oyster Cult. They played great. If I had a band, I’d want them to sound just like this! Their lyrics were funny, simultaneously dumb and smart. And what was the deal with that guy yelling between songs? Hilarious! Extra points for namechecking both Vern Gagne and Dick The Bruiser, two of my wrestling heroes. And man, did those two guitarists smoke! I couldn’t play the LP enough. I told everyone how incredibly great it was. I ordered a stock copy for Yardbird, and placed it prominently in the front of the “D” section. And it stayed there. I’d move it back to the front of “D” each time I came in. And it sat. Then one day, it was gone! I was thrilled. Someone else was gonna “get it”. Another soul would be saved by this album! I was crestfallen to later learn that one of the owners had sent it back to the distributor.

So I reordered it, and put the new copy in the front of the “D”‘s, where it stayed until Yardbird closed around 1978. A few years ago, while working at a large bookstore, I ordered a copy of the CD for stock. It stayed, unsold, for several months, in the front of the “D” section. When it was returned, I’d simply order another copy. One of the last things I did on my last day there was to order still another copy for the store. I wonder if it’s still there?

With the exception of THE WHO SELL OUT, THE DICTATORS GO GIRL CRAZY is the album I’ve played more times than any other over the years, and SELL OUT had an eight year head start. Both albums are funny, razor sharp, lovably flawed masterworks. I could never choose a favorite between them. I probably never will. But THE WHO SELL OUT is simply a favorite album. THE DICTATORS GO GIRL CRAZY is truly an old friend. Really, how many friends of 35+ years do you get in life?

More than any other band, The Dictators spoke to me. The Dictators spoke for me. And 35 years later, in my 56-year-old budding codger-ness, there are very few things that I know will always make me smile. My wife. My friends. My dogs. Some family members. Seeing a great band. Point Beer. Baseball. BBQ. The Three Stooges.

And THE DICTATORS GO GIRL CRAZY.