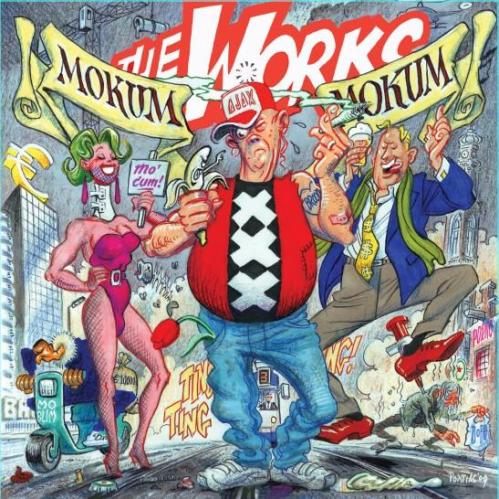 The spanking-new single from Holland’s the Works (www.theworksrock.nl) is a reworking of the ‘Tators/MWK classic “New York, New York.” In Dutch, “Mokum, Mokum” is a tribute to the Works’ hometown of Amsterdam (nickname “Mokum“). Hear it here: www.myspace.com/cheesetheworks. (Be sure to check out the lyrics, translated into English, at the end of this post.)

We at The DFFD Blog were impressed and intrigued, so we e-mailed some questions to the band’s singer, Marko ‘5 ft 7’ Petrovic:

What gave you the idea to redo “New York, New York?”

When we started the band we couldn’t wait to cover some Dictators tunes…And as with a lot of semi-neglected great bands you wonder why those songs never became mega hits. So it was kind of a joke to do NY, NY in Dutch with a big sing-a-long kind of like a football (soccer) stadium chant. Then our guitar player Gilian came up with the translated/modified lyrics and the song became a local favorite at our shows and now it’s out on vinyl!

How did you get into the Dictators?

It was about 10 years ago when I heard the Manitoba’s Wild Kingdom ‘…and you?’ album. I loved it! After asking around I found out that it was basically the Dictators and I started tracking down everything about the band and found your website! Right about that time DFFD came out and it just blew me away! Great melodies, mean guitars and smart and funny lyrics…everything I always wanted from a rock & roll band! It was also refreshing that the band didn’t fit any rigid genres or styles of punk or rock or whatever…very much a style of their own and with a healthy dose of disdain for all the trendhoppers and hipsters.

Can you explain “Mokum, Mokum” to the non-Dutch Dictators fans?

Well Mokum is an old yiddish name for Amsterdam and a nickname still used today. As with NY,NY it’s a love letter of sorts to the city we live in with all the annoying and the great stuff that comes with living in a modern day metropole!

What’s next for your band?

In a few weeks we’re doing two exclusive shows with another big ‘Tators fan, the cowpunk legend Scott Luallen of Nine Pound Hammer! We’ll be playing a mix of our songs, 9 lb material and a few covers by who else but the ‘Tators, Flamin Groovies, The Stooges…We’ll also do a recording session with Scott and lay down some new material.
More shows across Europe in France, Germany, Serbia….or as we like to say ‘Conquering the world, one sweaty shithole at a time!’

﻿You can buy the single — featuring the artwork seen above by legendary Dutch comic book artist Peter Pontiac — by e-mailing info@theworksrock.nl. It’s available on vinyl and CD for 10 bucks plus shipping.

I can’t stand my neighbours
Screaming all the time
Without Brood (http://en.wikipedia.org/wiki/Herman_Brood) on 10 (full volume)
I’d be long gone from the Pijp (this line has a double meaning; the literal meaning I’d be gone from the Pijp, a borough in Amsterdam, but the expression ‘de pijp uit’ also means ‘dead’)