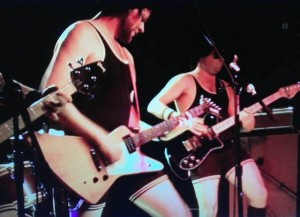 How can you not love Halloween? Throw on some zombie make-up or pink hot pants, and even the meekest shlub gets to indulge their inner wildman.

The Motorz, those shy and retiring wallflowers from America’s #1 party town, Madison WI, took advantage of this year’s Halloween to give voice to their inner Handsomeness. It was the Frequency’s Halloween bash, and The Handsome Dickz were the guests of honor before a crowd of Mexican wrestlers and women in chicken costumes.

It was non-stop Manitoba Madness!! The guys had obviously spent time listening to HDM’s spoken word cds, because the raps were as entertaining as the music was. Mad-town was taken to task over being the back-pack capital of the world, and the audience was constantly reminded what an honor it was for them to see the band. It’s always a good thing when the band is having as much fun as the crowd.

Thanks to Dan “The Danimal” Mendoza Shernoff, Bottom of the Top Ten, Josh “J.P THUNNNNDERBOLT!! “ Richie Teeter Patterson, and Handsome Kyle the Boss for making the good times happen. 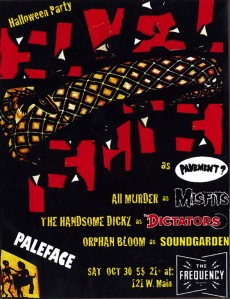