We know a lot of people want to know how MANITOBA’s New York City debut went last night*, but The DFFD Blog’s official reviewer is still driving up 95 …

Let this video of the band’s amazing power onstage at Bowery Electric suffice in the meantime!

Happy Holidays From The DFFD Blog!

It doesn’t matter if you celebrate Christmas, Hanukkah or Kwanzaa — we ALL celebrate the Dictators! Happy holidays and Dictators Forever Forever Dictators!

To celebrate, some video of the band in 1997 at Coney Island High … enjoy!

We’ll have a much longer blow by blow on the Norton 25th Anny weekend in the days to come, but while we try to deal with the harsh return to reality, and sift through the detritus of the trip (any theories as to why I bought a “Learn to Dance with Jackie and The Cedrics” DVD would be appreciated), here’s the highlight of the event from our Dictators-centric point of view. Enjoy.

And, in case you missed it, here’s a link to video of HDM, GN’R and the MC5’s Wayne Kramer kicking out the jams from the same night!

(Manitoba, Where You At?)

It all started with a post on The DFFD Blog about Top Ten and the Del Lords doing a “secret” gig at the Lakeside Lounge in NYC, as a warm up to their Spanish shows. Actually, no, it all started when my ex-boyfriend’s band did a co-headlining gig with RTB’s German band in Brooklyn in 2009 … but that’s a story for another day. I had already met 3 current Dictators (the aforementioned RTB, JP Patterson, and Andy Shernoff) and had only two to go. This was my chance to hopefully cross at least one more off my list!! Since I had already friended Scott on Facebook, I sent him a short note asking if the secret gig was still on, and explained that we had a mutual friend so he wouldn’t think I was a stalker. He was kind enough to write back a few hours later to confirm.

Flash forward to 7 o’clock that night, a friend and I are sitting at the bar when, in hushed tones, a gentleman to my right asked the bartender how things were going to work for the gig tonight, as the bar’s website mentioned a $20 “donation.” This sparked a conversation about how we were both huge Dictators fans and were psyched to see one of them in such an intimate venue.  He had heard about the gig the same place I had, through Salvi and The DFFD Blog. A few more people trickled in, and we made our way over to the stage area in the back of the bar. My friend and I snagged primo seats, and as I was settling in, I looked over and there was Scott Kempner and his guitar, setting up. I quickly introduced myself to him, we shared an inside joke about someone’s extreme and baffling political views, and I let him mingle with his friends and family.

As I was patting myself on the back for appearing so calm and collected, I spotted a familiar looming figure. It was Andy Shernoff shaking hands with the crowd. Apparently the people at the next table from us were who he was there to meet, and the next thing I knew he was sitting next to me, and he remembered me. More back patting ensued. Andy’s friend introduced himself to me as one of his oldest friends, back from the days of New Paltz and the Teenage Wasteland fanzine, Bobby “the Brain.” He told me how they used to print the fanzine by hand on mimeograph paper. I was truly in awe of being surrounded by Dictators history.

END_OF_DOCUMENT_TOKEN_TO_BE_REPLACED

Is there any more beautiful sight than the four guys rocking out gathered together at the front of the stage?

(NB: This is a rhetorical question. Please don’t spam me with pix from Adriana Lima’s new Victoria’s Secret shoot. I’ve already seen them all.)

Thanks to Chip Zepp for the video!

According to billboards along the highway (I-95, north and south!), May 21st is Judgment Day. To help ease your ensuing pain and suffering, Andy Shernoff has released a new song: “Are You Ready To Rapture?”

The full-fledged video will arrive in the summer — if there is a summer! — but click above to listen to the track in full now. You can also download it for free at AndyShernoff.com!

More Hair Than a Barbershop Floor 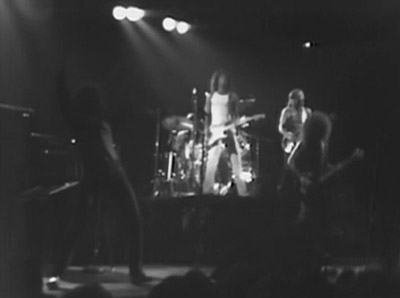 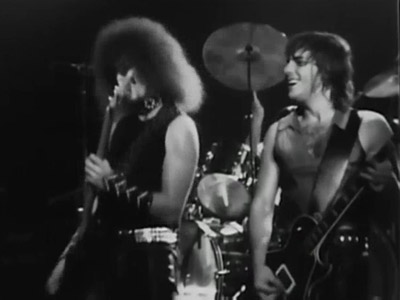 Can we nominate Bill Graham for sainthood and be done with it? After years and years of having no live footage of the 6-man line-up available except for 1 tune from the Old Grey Whistle Test, Wolfgang’s Vault comes across with an entire 50-minute set, from Winterland in San Francisco on 7/30/77. Fantastic quality, multiple cameras, many Jewfros, arena stage moves by the galore. Grab a beer, and prepare to be amazed: