For those of you planning to kick it old school with the Master Plan this Friday and Saturday and during their upcoming two-week tour of Spain, we share a taste of the band’s recent live action, courtesy of Veer Magazine.

[Edited to add: The Spanish dates have been updated here.]

Return to the Lost Continental 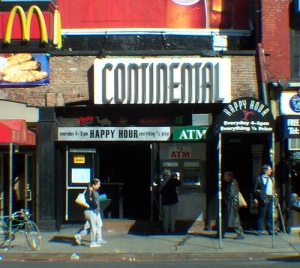 The Continental, along with CBGB’s (RIP) and Coney Island High (RIP), was once a highlight of the East Village’s Punk Rock Club Circuit; however, unlike the other two spots, the Continental has remained, at least, a drinking establishment (and not a high-end clothing store) since it changed its business model in September 2006. But now it’s merely a place to drink and get drunk, and not a place to drink and get drunk while watching the Waldos.

As we gear up for the reunion next Sunday night — remember that the next day is a holiday, so you can stay out late — we at the DFFD Blog take a look back at the big show that closed out the club’s first chapter on Sept. 17, 2006.

A report from SugarBuzz Magazine on that final night discussed being confronted with the “mammoth power and energy” of the Handsome Dick Manitoba Band, consisting of HDM and the members of Thunderboss (aka Ross the Boss, J.P. “Thunderbolt” Patterson and bassist Dean Rispler):

Despite the one-off nature of this lineup, they were tight, shit-hot and need I say LOUD as they straddled the line between Manitoba’s Wild Kingdom and the Dictators, opening with “The Party Starts Now!” (no shit cause the mother erupted!).

Read the rest and check out some photos at SugarBuzz Magazine.

OK, OK, so the 28th of December isn’t technically New Year’s Eve, but check out the milestones that made this a more momentous gig than your average holiday show: