If the Dictators Played the Super Bowl 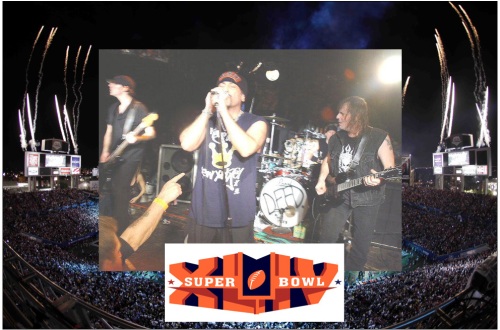 The staff of the DFFD Blog takes a moment from praying for a Saints victory (OK, that’s just DFFD123) to imagine the awesomeness that would occur if the Dics were the 1/2-time entertainment for this weekend’s Super Bowl, instead of 1/2 the Who:

I see White Castle doing its first nationwide rollout, bringing you THE All American Band, with the songs being lyrically rewritten to hawk The All American Burger. Co-sponsors could be Beano, Pepto Bismol and several air freshener companies.

“Faster and Louder” could be adapted to reflect the inevitable intestinal discomfort that accompanies a Whitey binge. “Stay With Me” could be come “Pray With Me (To The Porcelain Throne)”: “My My My heartburn’s callin’, won’t you pray with me?” Other possibilities: “Two Toot Man”/”Explodes”/”What’s Up With That (Smell).”

RTB plays a custom-made guitar shaped and painted as a White Castle burger carton, preferably the old style, which were actually shaped like a White Castle restaurant. Kempner could have a similar guitar patterned after the current carton.

Manitoba wears a paper White Castle chef’s hat in place of the ever-present stocking cap, but with “HDM” or a Star of David still in place. Manitoba would throw White Castle fries, onion rings, chicken rings and packets of their legendary babypoop mustard at the crowd.

A comely young lady, dressed as a White Castle hamburger (a la the dancing tooth in Alice Cooper’s “Unfinished Sweet” and “Welcome to My Nightmare”) is disrobing from her cardboard carton, with Manitoba sampling her onions then liberally slathering her with that mustard (actually Dusseldorf mustard), while the band plays “Channel Surfin’.” There could also be a cheezeburger onstage as well.

Scantily clad Gotham Roller Girls would use  t-shirt cannons to bombard the crowd with hot, fresh Sliders, Cheezeburgers, Jalapeno Bacon Cheezeburgers, all the good stuff from the Castle menu. The crowd would be regularly bombarded with Beano during first-half timeouts, Pepto Bismol during the second half.

During the second half, airborne tanker planes, the kind that are used to dump water on forest fires, would make regular passes over the stadium, alternately overspraying the entire stadium with Glade, Febreze, Lysol, etc. Possibly a USAF tie-in there?

One response to “If the Dictators Played the Super Bowl”