Can you imagine how great this might have been? When two guitar monsters face off, declare “we don’t need no stinking vocal mics” and rip through instrumental versions of “Rambling Rose” or “Science Gone Too Far?” Maybe they trade off on the long instrumental break that used to be the prelude to “Two Tub Man,” or dust off “Interstellar Overdrive.”

It could have been a gig for the ages. Unfortunately, Reality kicked Imagination’s a** yet again, and it was merely your garden variety rent party. Brother Wayne had just left Gang War, and was in dire straits financially, allegedly reduced to sleeping in abandoned cars on the LES. Ross had just left Shakin’ Street, and the Dictators reunion, which had kicked off the previous November, was on hold for another few weeks until Richie Teeter cleared his calendar.

RTB’s recollections of the night were succinct —  “Wayne did most of the singing. We did some MC5, some reggae.”

Filed under Ross the Boss, The Cincotta Archives

Malarkey in the UK!! 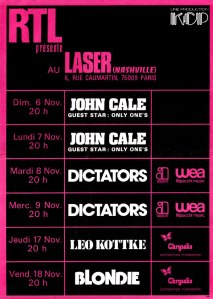 This week in 1977 found the Dictators at the mid-point of their first-ever European tour. In support of the Stranglers, who were the biggest band in England at the time, the guys were stuck in the dreaded opening slot for most of the tour.

Opening acts here in the US of A are met with disdain and indifference. Opening acts in the UK were literally spat upon, which invariably was met with physical threats from either Scott or Mark. It’s a safe bet that the waiting rooms at local dentist offices were standing room only when our guys were done distributing the hurt.

The tour wasn’t all phlegm and broken teeth. Seeing the CIash and Generation X enthrall their audiences led our guys to transition from their alignment with the heavy metal dinosaurs (looking at you, Heep) to the younger, sharper, stripped down sound of the new wave. The now-classic “Bloodbrothers” sound — no frills, all thrills — was conceived right here.
END_OF_DOCUMENT_TOKEN_TO_BE_REPLACED

The Terror of Middletown

October 1999: The WMBR concert report for the week ended with “Oh yes, there’s a Dictators show in Middletown, Rhode Island, on Saturday.” What better excuse could there have been for a road trip! After checking the map to find out just where the hell Middletown was, we hit the road, and finally stopped for info at a 7-11 on Rte 138, which was really the only way in or out of this podunk. The very helpful girl behind the counter said, “Well, I never heard of your band, but the only place they could be playing is Sebastian’s. Take a right, go behind the Ames, and you can’t miss it.”

To me and anyone from Massachusetts, “behind the Ames” was either where the dumpsters were stored, or where the homeless set up. But we weren’t in Mass. any more, Dorothy, and behind this Ames, sure enough, stood Sebastian’s, a bowling alley/billiards/nightclub, the entertainment mecca of southern RI.

The first thing we noticed when we walked in was that there was a drunken dwarf staggering around the place. Or maybe he was the last of the Oompa Loompas. In any case, the little person, who we shall refer to as Stumpy from here on in, was falling down drunk, and staggered from table to table, at one point literally resting his head on our table while exclaiming “Yer purty!” to my date for the night.
END_OF_DOCUMENT_TOKEN_TO_BE_REPLACED

Feb. 23 was the 10-year anny of this gig, which was the only show ever attended by all 3 members of the DFFD editorial staff. This was the Dictators’ first Boston show since the release of “DFFD,” and Axis was packed from the get-go. HDM offset the usual Boston hecklers by congratulating the Patriots on their 1st Super Bowl win, and by declaring that he’d won $500 betting on the game, so maybe he was “a Closet Patriots fan!!”

WMBR heavily promoted the gig, and a couple of the djs were walking around with their little kids in tow. I wonder what those 4-year-olds with Mohawks think about those days now.

END_OF_DOCUMENT_TOKEN_TO_BE_REPLACED

The summer of 1989 found a commercial in heavy rotation on the local “alternative” radio station. WFNX was playing the bejeezus out of a spot for a movie called “Mondo New York.” It started out as a backbeat-heavy thing, interspersed with quotes from the film, but then a very familiar riff came roaring out. “Holy Cow – is that the DICTATORS??” was my reaction the first time I heard it. Close enough, it was actually the debut recording on Manitoba’s Wild Kingdom, with an un-credited RTB on lead, blasting their way through “New York, New York.”

The very cool radio spot played incessantly for 2 weeks, leading up to the movie’s debut weekend. Which, by the way, was also its closing weekend. The reviews for the film were uniformly savage, with “pointless, pretentious, and puerile” being my favorite, and pretty much chased the flick out of town and into oblivion, where it’s remained for the last 20 or so years. Rumors of the film containing some footage of our boys went unconfirmed.

I recently saw a VHS copy on Amazon, and thought to myself, “Well, the reviews were terrible, and the soundtrack LP was worthless.  But the commercial was great, so surely the film it came from has to have some small degree of merit, right? Right?” Well, $20 later, I’m here to tell you that MNY is every bit as putrid as the critics said it was.

END_OF_DOCUMENT_TOKEN_TO_BE_REPLACED

Filed under Movies, The Cincotta Archives

On this day in 1977, the Dictators took the Belt out to Lung Island for this gig at Ubies. I’d bet a bomb pop that the “Guest Attraction” was either the Good Rats or Twisted Sister, since Ubies was a regular spot for both bands. The rumor remains unconfirmed that Ritchie Teeter and Mark the Animal, both native LI’ers, had to translate for the evening.

$2 cover!! That didn’t even cover the tolls to get there!

This week marks the anniversary of the first-ever West Coast trip for the Dictators in 1977. They borrowed the Ramones van and headed way out west. The Left Coast has never been the same.

The trip started and ended with gigs at the Mabuhay Gardens in San Fran, with gigs in Berkeley and Palo Alto in between. The great-looking poster below is from the final show, and the famous pic above of the 6-man lineup was taken backstage at the Mabuhay. Scott appears to have borrowed eye-liner from Johnny Thunders in this pic!

This weekend marks the anniversary of the Dictators’ 1975 legendary road trip to Atlanta, GA, to open for Rush at Alex Cooley’s Electric Ballroom. Open from 1974 through 1979, the Electric Ballroom was a major touring destination of the time, hosting such names as Cheap Trick, Ted Nugent and Broooooce.

This was one of the earliest road trips for the Dictators, who were in the embryonic stages of the road from Complete Indifference through General Disdain, before settling down in Open Hostility. The guys only completed 2 nights of a scheduled 4-night stand before being sent home by Rush. The epic failure of the road trip has taken on mythical status, so much so that it’s recounted by band members with almost perverse glee. According to Shernoff, “It was right about here where they stopped ignoring us and started hating us.”

Filed under Live, The Cincotta Archives